Check out TranslateWith.Wiki for the final result!

Although machine translation is far from perfect, over the past years services like Google Translate and DeepL have made it possible to at least catch the gist of a huge number of texts that would otherwise be unavailable to non speakers. These kind of machine translation services use deep learning to translate whole texts and do a great job at translating large texts. However, when faced with single concepts or terms they fail quite often, usually by translating a term much too literally.

For example the 2009 swine flu pandemic was known in the Netherlands as the Mexicaanse griep, refering to the country where it was first detected. However, as you can see in the screenshot above, Google Translate would translate “Mexicaanse Griep” completely literally as “Mexican flu”. This can be very confusing when communicating with someone from another culture, so when I want to translate a concept like this I usually go to Wikipedia, search for the concept and select the language I want to translate to from the “Other languages” feature. However, this is quite some work, a lot of scrolling and clicking.

What if we could make this a bit easier? If we have an interface similar to Google Translate, but with the accuracy of Wikipedia translations? That’s what I’ve tried to make with TranslateWith.Wiki. 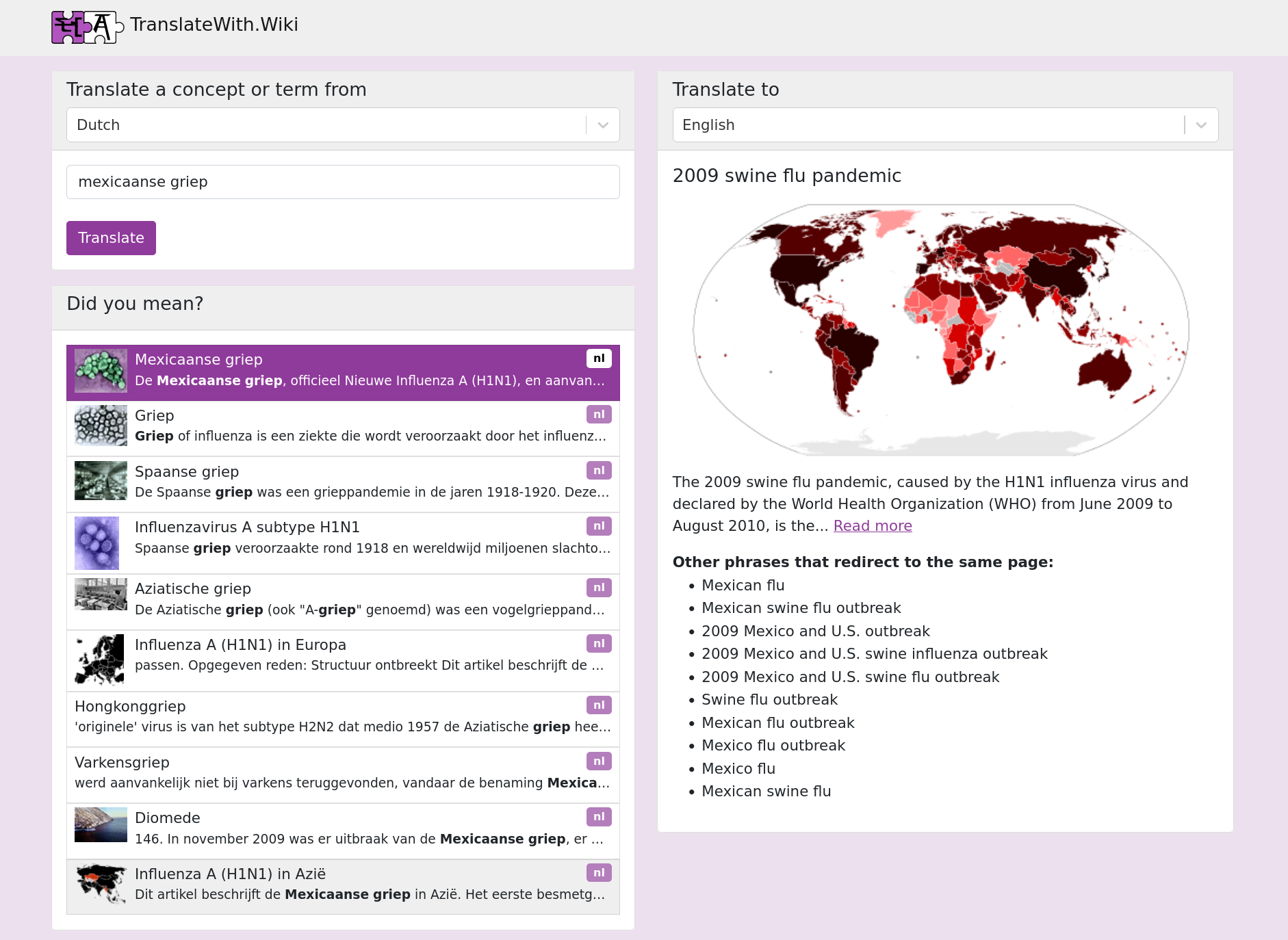 You simply enter the term that you want to translate and a search is done on Wikipedia. The site then shows matching articles and the language links of those articles are then used to translate the term into the language of your choice. Some contextual information and nice images are also shown, to help you understand the translation. I even implemented that nice Detect language feature that Google Translate and DeepL also have, so you don’t have to bother choosing the input language usually! 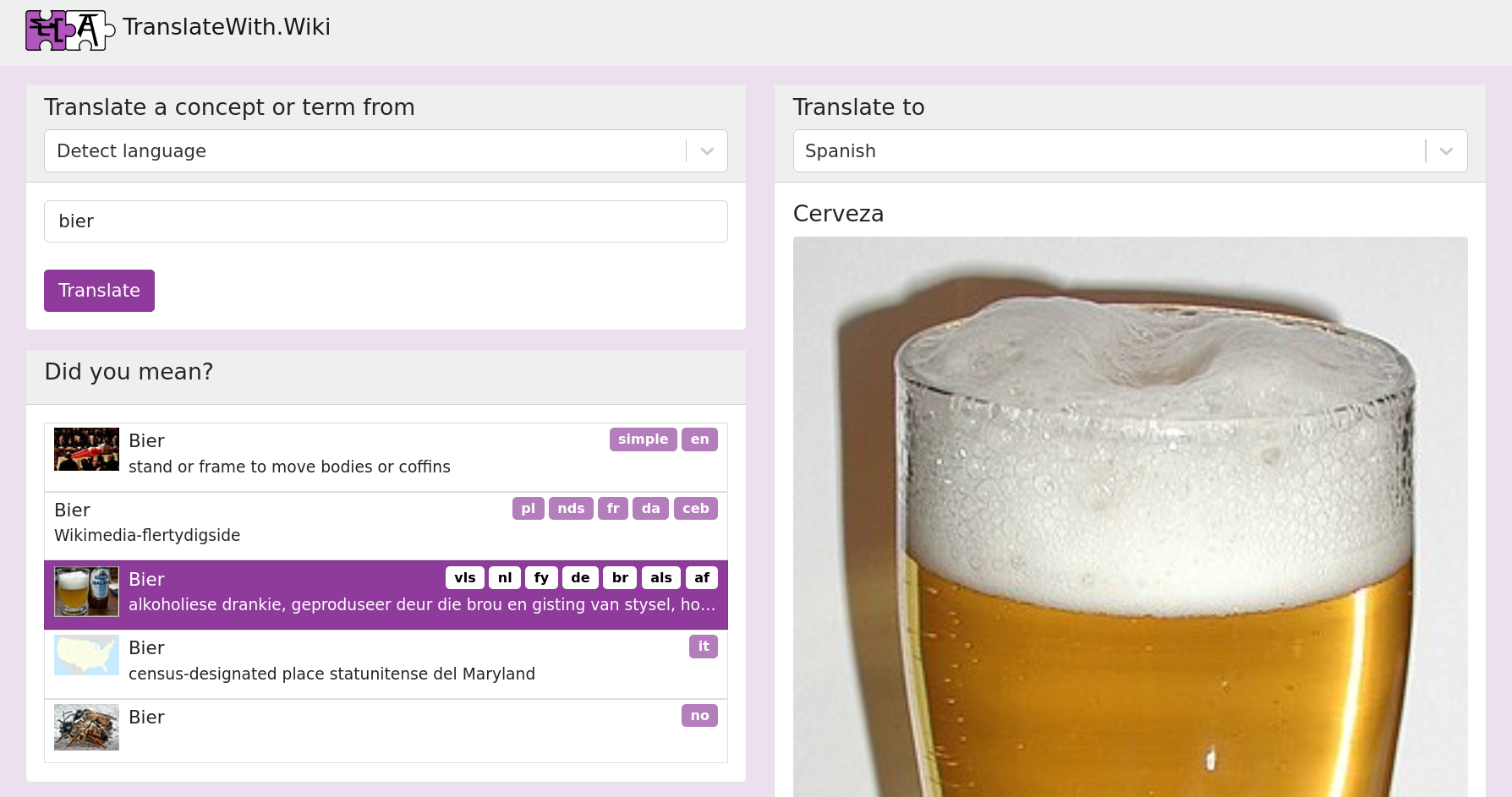 So how did I make TranslateWith.Wiki? Well, it is open source, so you can see so for yourself on Github.

It was made with React and NodeJS, I really like the straight forward set up of React for simple web apps like this. I used TypeScript and sass to keep it all nice and tidy. The backend only needs to serve the layouts and scripts to the frontend, because all logic is handled on the frontend.

For our communication with Wikipedia, we can use the awesome MediaWiki API that all the different Wikipedia languages implement. When the user wants to translate a term, we call the API of the source language Wikipedia from the local browser. We simply search for the term they enter and display the results below. We automatically select the first one and find the language links associated with this article. From nthose language links we can simply get the right article in the destination language and display the result.

The only tricky thing here was to parallelize all the requests properly so that the user has to wait as little as possible. After all, the whole goal of this website is convenience and convenience is speed!

I struggled with how I could detect the language of the term most efficiently. I believe this feature is crucial to save the user a tiny bit of time. My first idea was to predict the language of the word using some machine learning, but this is simply not accurate enough for the short prompts that users would input. Furthermore, quite often one same spelling of a word can exist in multiple languages with different meanings and it would be impossible with this method to distinguish between those.

My second idea was to simply search all the different Wikipedias with the search string and chose the one that matches best. But there are too many languages in the world and searching on all of them just takes too long!

But then I found Wikidata, which stores all structured data from all the wikipedias. And this also has a search function. On Wikidata we can search all the different Wikipedias at the same time! Now we can just show the different results in the different languages and the user can pick the one that they meant. Only downside here is that this search can only be over the metadata that is actually in Wikidata, which is not that much. So when you use the Detect language feature, the input needs to be pretty close to some Wikipedia article, otherwise it just won’t be found. Still, I think it works great for the most important concepts.

In the end, TranslateWith.Wiki is at least something that I will use. It might save me a few seconds a week on clicking through Wikipedia, so that is totally worth the hours it took me to make right?

Anyway, maybe someone else finds it helpful as well. If you have any suggestions on how to improve it, feel free to let me know by emailing me, creating an issue on Github or simply improving it yourself by writing a patch.